Whether professionally or personally; whether of great or little importance; whether done poorly or well; and whether consciously or otherwise; we all negotiate all the time. Despite its ubiquity, however, good negotiation isn’t natural or intuitive. Neither is it included in our standard educational curriculum. And parents typically provide their children with a poor model for negotiation.

There are plenty of publications offering negotiation techniques such as: (1) never reveal your return flight schedule; (2) Don’t make the first offer and only make offers divisible by three; (3) never/always sit with your back to a window; and (4) never/only use the opponents first name.

There is a place for such techniques, but this is not that place.

This post is intended to introduce a simple set of integrity-based principles that will lead to favorable results without burning bridges in a wide variety of negotiation scenarios. It’s about the win-win negotiation paradigm. Query, for instance, when 1/5 of a pie is more than 1/3 of a pie? Never, if you assume that the two pies are equal in size. On the other hand, 1/5 of a 9″ pie is more than 1/3 of a 6″ pie. Sometimes a smaller share of a bigger pie is better than a bigger share of a smaller pie. Keeping your mind open to a variety of positive outcomes is the gist of win-win negotiating. My first inkling that negotiation needn’t always be a “zero sum” game came from a law school class on Alternative Dispute Resolution.

My take on the classic tale of two parties fighting over an orange provides a snapshot of the ideal win-win negotiation:

“Two parties each claimed rightful ownership of the oranges. Neither would compromise a single orange from the 4,000-ton cargo. After several days of heated negotiations, the first officer reported to the captain that discussions had reached an impasse. The captain called the parties into his office. Within a few minutes, they reached an agreement. The first officer was flabbergasted. Did the captain threaten to keelhaul them, or make them walk the plank? Did he offer to dump the oranges overboard? Did he scrutinize the bills of lading? The truth was more prosaic but no less effective. After the captain sat the parties down and looked over their business cards, he immediately realized the problem. The parties were fixated on their positions – which conflicted, and not their interests – which didn’t. One party was a beverage wholesaler who only wanted the juice. The other party was a marmalade manufacturer who only needed the peel.”

To really learn how to re-think your approach to negotiation and generate win-win results, please check out “Getting to Yes,” by authors Fisher, Ury, and Patton of the Harvard Negotiation Program. It is full of practical ideas about how to drive win-win negotiation. But if you just want to dip your toes into the water, try applying the following concepts from “Getting to Yes” in your daily negotiations.

SEPARATE the PEOPLE from the PROBLEM

Faced with new information such as a statement by a negotiation “opponent” the easiest course is often to make judgments about the statement based simply on the source. The more challenging, but ultimately more rewarding approach is to evaluate statements on their merits. Try disassociating unfamiliar ideas from their sources and consider them purely on their merits. Learn to focus on what the other side is saying, not who is saying it. Try imagining the idea coming from a source you trust and give it fair consideration on the merits.

FOCUS on INTERESTS not POSITIONS and INVENT OPTIONS for MUTUAL GAIN

When we think of negotiation as a contest with one winner and one loser, positional negotiation is natural (e.g., gunslingers facing off at high noon, or a baseball pitcher staring down a batter). 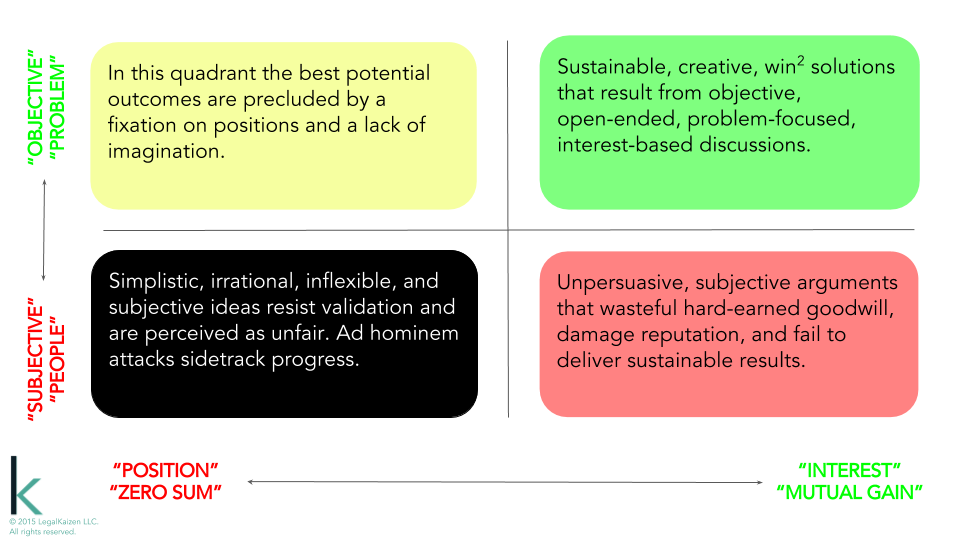 It is often the case, however, that positional negotiating is not in your best interest. For instance, consider a couple of examples of how focusing on interests rather than positions can highlight common ground:

(2) A wildlife conservation group seeks a complete ban on hunting in national parks. A hunting lobby responds with a proposal to permit automatic rifles in national parks. It turns out that scratching below the surface a little, conservationists and hunters share a common interest in preserving wildlife habitat for future generations.

KNOW your BATNA and WATNA

BATNA and WATNA are what might reasonably happen if the parties don’t reach an agreement. 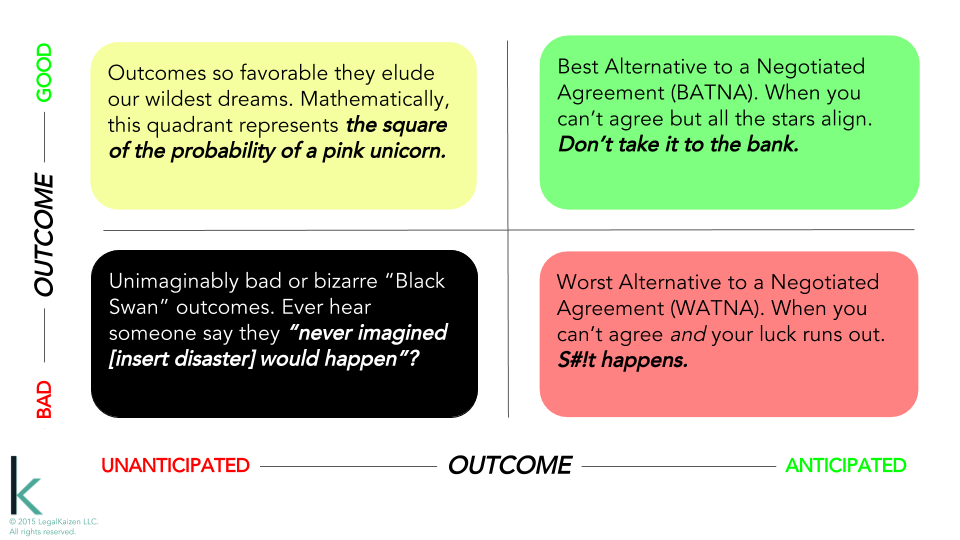 Thinking through your Best (and Worst) Alternatives to any Negotiated Agreement is always a good idea, even if you can’t separate the people from the problem, focus on interests, find mutual gain, or use objective criteria. BATNA/WATNA is a reality check.

It helps to reduce pointless grandstanding/posturing. BATNA/WATNA also help “bookend” the low and the high value of what you are negotiating for and in doing so it helps narrow the gap between the parties and thus drive resolution.

A few years ago, I created the above-embedded quadrant diagrams for a client. They were well-received and I’ve used them a few times since. Please feel free to use them if they’re helpful. If you want to know more, reach out to me or buy a copy of “Getting to Yes.”